One of our experienced Die Designers developed innovative and interchangeable die components in a single progressive die to establish precision stamping operations for an appliance manufacturer. This production process focused on both feasibility and flexibility. It has required modifications to both the die’s design and features of the customer’s stainless-steel side tables to establish the correct stamping operations.

For example, the appliance manufacturer moved the location of a rectangular cut-out to align with the basic die design. This was preferred over altering the entire die which would have increased costs and design time. The quality and dimensions of this rectangular cut-out remained intact to perform as designed.

In another example, a hole that required coining; was added to a different version of the stainless-steel side table. This time our Die Designer made the adjustments in the die’s design to deliver a part that matched the original design print. He evaluated each of the six progressions in the stamping die to decide when was the best time to coin the hole.

SOLUTION – The Die Designer determined that the second station could be adjusted to have the coining operation performed there. This required shortening the lifter and moving the nitrogen cylinder that lifts up the lifter.  A plate was placed over the old nitrogen cylinder hole so that a new coining block could be mounted on the plate.

We’ve got you covered from….

Designing every detail for a progressive stamping die… 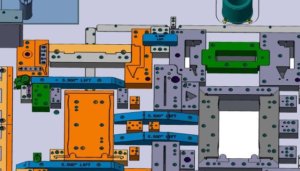 to building the actual die components…. 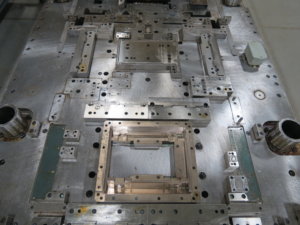 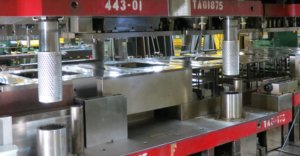 A key factor in utilizing a single progressive stamping die is designing components that can be easily removed during changeovers. Changing some die components, like the one for cutting out the larger shape in the top of a side table, needs to be completed in the Tool Room. However, other die components can more easily be removed at the stamping press byUltra’s experienced Toolmakers.

Utilizing only one progressive stamping die reduced this customer’s tooling costs and is also improving productivity and consistency for their product line of stainless-steel appliance parts. Of course, there are still downtimes with changeouts and inspections, but this is nothing compared to removing and setting up five different metal stamping dies for five different metal parts.