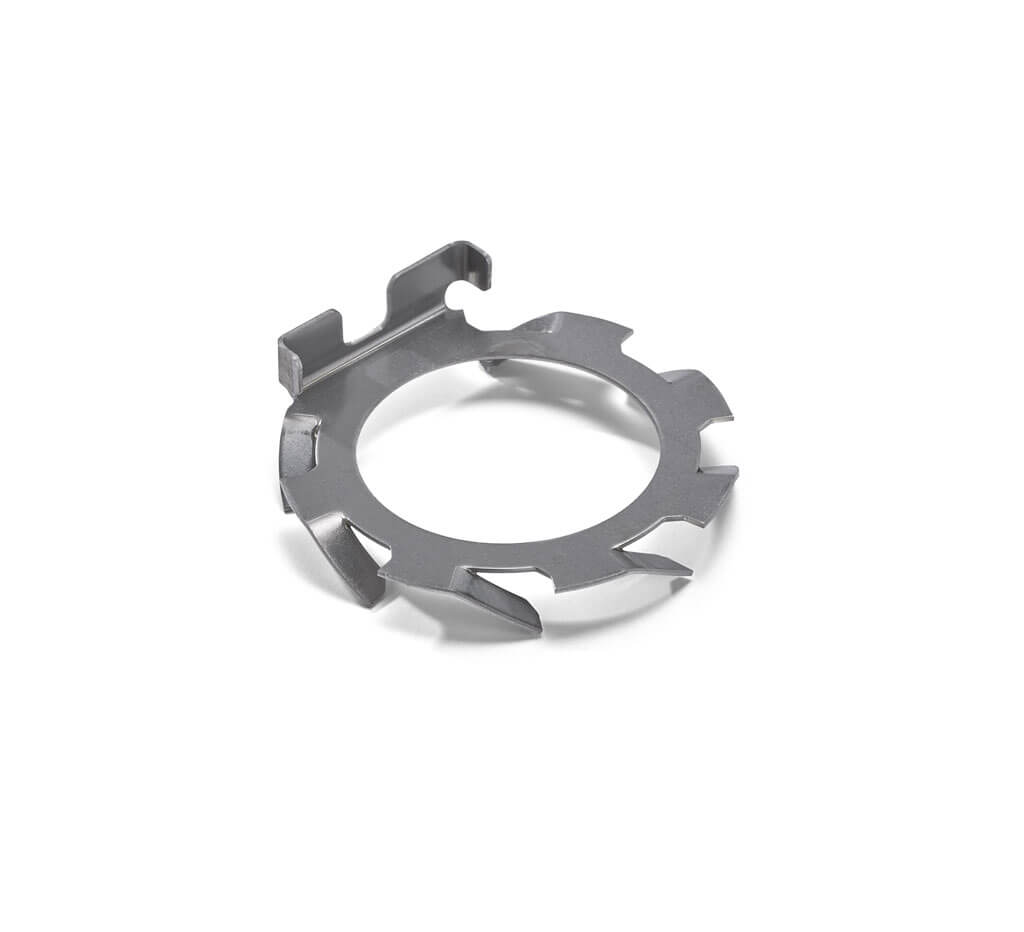 The customer's current tooling supplier was having difficulties achieving the “twists” in the lock washer's tabs. This was leading to the parts never passing the initial testing phase.

Full production was being delayed as a result for both the lock washer and the final end product.

Have Ultra inherit the tooling die and fix it to accurately produce lock washers that match the design print.

Maintain the integrity of the “twists” on the lanced and formed tabs since the twists are critical to the overall function of the lock washer. These "twists” are the major contributor to obtaining the locking features and achieving the minimum force requirements.

Ultra’s team of Die Designers, Toolmakers and Engineers evaluated the customer's current tooling die and determined it was incapable of being modified to meet the part print. We recommended designing and building a new progressive stamping die.

The customer was obviously concerned about the time to complete this project and if it was even necessary. To better support our recommendation, we highlighted a similar part Ultra had successfully developed and currently metal stamps. Also, we completed detailed prototyping before the actual die designing began.

For the prototyping, we first designed and built the testing equipment which was a force test fixture and a gauge. This allowed us to develop the cut and form geometry of the locking features (“ the twists”) against the force test requirements, as well as the torque and return height requirements which are all critical to the function of the lock washer.

Also, during this prototyping we were also able to prove out the overbends and cut/form sequences that would be used in the progressive stamping die to determine what would yield acceptable parts. Once these prototypes of the lock washers passed the customer's testing, it was time to proceed forward with designing and building this tooling die.

Another key feature when designing this stamping die was building in features that allowed for adjustments to the tabs as needed. This was necessary to accommodate for natural variations in the ½ hard stainless steel that was utilized to stamp the lock washers. We also included features that made die maintenance easier which is handled at Ultra for the customer.

Ultra currently is metal stamping 1,300,000 of these lock washers every year; and they are successfully passing the customer's various performance standards.

The (6) bends and (8) holes require a detailed and customized fabrication process to match the design print. Hardware insertion and final inspection complete this production process.

Production costs were increasing because a splash guard and (6) drainage slots were added to the part’s design to meet safety requirements. The part’s length changed with these newly added features and made the existing die unusable.

A successful transition from a two-piece welded assembly to one-piece aluminum frame with 21 hardware insertions required the manufacturing expertise of our Die Designers and Toolmakers.