This video highlights a manufacturing process improved at our Minster 300-ton stamping press utilizing sensor technology that was designed and built by our Automation Technician, Andrew.

The press operators identified an opportunity to increase production rates for these metal head covers from 30 strokes a minute to 35 strokes a minute.  The primary roadblock preventing this increase was the capacity of the washing station after the metal stamping.  The head covers needed to enter the washing station with adequate spacing between each other and at a consistent rate on the conveyor belt.

Install a longer conveyor belt utilizing automation and sensor technology to control the alignment of the head covers and maintain a steady rate into the washer.

A total of three cylinders were determined to be the best actuators for performing the following operations.

The two side cylinders operate opposite of each other and push a head cover into position on the conveyor belt while maintaining a consistent rate.  Then a single “guided thrust” cylinder extends downward to temporarily stop and orient the part.  It then retracts to allow the correctly oriented head cover to pass through to the washing station.

How do the cylinders perform these operations?

A PLC (Programmable Logic Controller) communicates to each cylinder to extend or retract; and the PLC receives this information from the NINE SENSORS in the automation station.

Each of the three cylinders has (2) Inductive Proximity Sensors that detect ferrous material (any material containing iron) and also sense that if the cylinder is either fully retracted or fully extended. 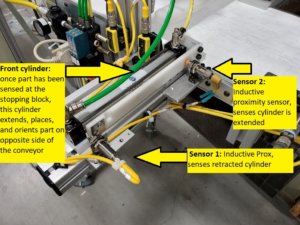 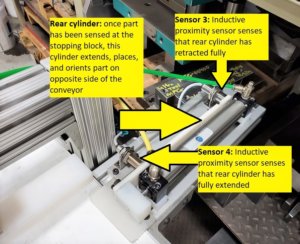 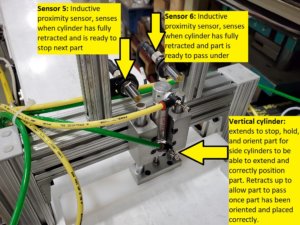 There is (1) Laser Sensor that detects that a head cover has fully passed under the retracted stop block and signals the stop block to return back down into a “stopping position”.

There is (1) Laser Sensor (located a few feet before the other sensors and cylinders) that detects a log jam if it sees a head cover for longer than two seconds. 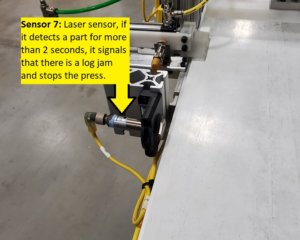 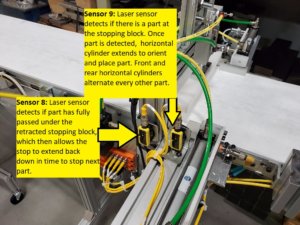 We have the technology and equipment to handle your stamping needs!